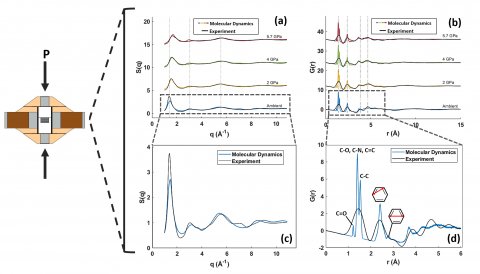 (Left) Cross section of the sample holder assembly used at HPCAT. (Right) Comparisons between experimental data and MD simulations for (a) the structure factor at various pressures, (b) the pair distribution function at various pressures, (c) the structure factor at ambient pressure, and (d) the pair distribution function at ambient pressure with labeled peak assignments.

Polymers are becoming increasingly important in defense, medical and aerospace applications, as they have many desirable properties that can be tailored by varying their chemistry. One such polymer, polyurea, is an amorphous block-copolymer with “hard” and “soft” molecular segments that has shown exceptional performance as a coating for blast mitigation, impact resistance, and shock wave attenuation.

A thorough understanding of the atomic and molecular level response of polymers used in defensive coatings under high pressures is key in designing these coatings and formulating atomic- and continuum level models of their response. A recent paper by Arizona State University and University of Massachusetts Lowell collaborators reports findings from experiments with polyurea conducted using the unique capabilities of beamline 16-BM-B at HPCAT. In these experiments, multi-angle energy-dispersive X-ray diffraction (EDXD) measurements—based on the total scattering technique—were performed in situ to study the behavior of polyurea up to ~6 GPa.

The study was conducted through an analysis of the measured total structure factor (SF) and the subsequently derived pair-distribution function (PDF). In particular, information was obtained on the effects of compression on direct bonding between atoms in linear chains and aromatic rings, spacing and order between hard segments, and π-stacking. Significant progress was made on validating molecular dynamics (MD) simulations for polyurea, since SF and PDF peaks predicted by MD were within a few percent of the measurements. The combination of experiments and modeling also revealed that polyurea’s high pressure response is driven by compression within and between the soft segments, as well as between hard segments. These results, in turn, can be used to improve MD models of polyurea’s response to high pressures, and demonstrated the effectiveness of studying amorphous polymers with the EDXD total scattering technique.