Exploration of the formation of diamond nanothread derivatives under high pressure 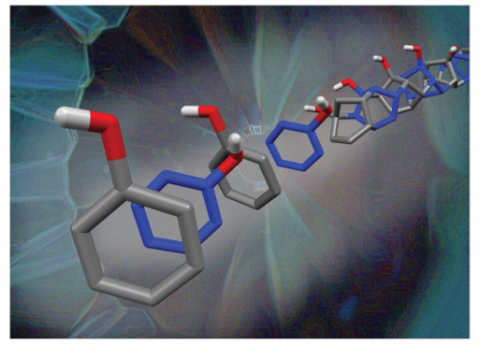 Herein, aryl/perfluoroaryl (Ar/ArF) stacking pre-organizes reactants for precise C—C bond formation through pressure-induced polymerization. The resultant polymer is a one-dimensional alternating structure featuring an sp3-rich backbone, and pendant -OH groups. Such rigid backbones are theorized to possess the strength of diamond, the chemical versatility of graphene, and a large insulating band gap. Our approach relies on a retrosynthetic supramolecular design to engineer an alternating sequence embedded in the reactant that transfers completely to the product with high fidelity.

The compression of a phenol:pentafluorophenol co-crystal as highlighted in Chemical Science sought to probe functional group tolerance of an -OH substituent. The use of supramolecular preorganization in a co-crystal enabled close packing of aromatic rings that preferentially favored one-dimensional polymerization due to electronic character. X-ray diffraction, as collected at beamline 16-BM-D at HPCAT, revealed a pseudo-hexagonal diffraction pattern of the recovered product.  Evidence of polymerization being initiated emerged at a lower pressure (13 GPa) compared to previously reported benzene-derived nanothreads (18 GPa). Packing simulations of the candidate structure for the co-crystal-derived nanothreads closely matched with the experimental anisotropic six-fold diffraction pattern, confirming the one-dimensional polymerization along the stacks of closely-packed aromatics as preorganized in the aryl:perfluoroaryl co-crystal.

In collaboration with ExxonMobil, the team discovered the capability to initiate nanothread formation at the lowest recorded pressure (10 GPa) by utilizing furan as a precursor as highlighted in ACS Nano. In situ XRD at HPCAT demonstrated the progression of single-crystalline furan towards an ordered crystalline product that possesses a pseudo-hexagonal diffraction pattern, illustrating the transformation into bundles of tightly compact nanothreads. The low pressure of polymerization is theorized to be due to the reduced aromaticity in the furan structure, illustrating that electronic manipulation of nanothread precursors is an available route towards understanding nanothread reactivity.

Such studies feature two new methods toward functional and scalable high-pressure syntheses of designed nanothreads: (i) programming closelyp-stacked molecules in co-crystals and (ii) tuning the electrons of precursors to favor robust addition reactions.

For more of the Penn State research team's work at their NSF Center for Chemical Innovation, see: https://cci.chem.psu.edu/