“Superdiamond” Carbon-Boron Cages Can Trap and Tap into Different Properties 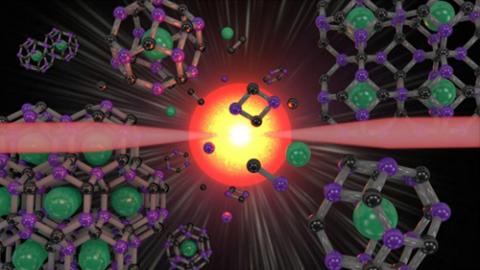 A recent article in Science Advances has been selected as one of the Advanced Photon Source's science highlights.  The team of researchers, led by Tim Strobel and Li Zhu of Carnegie Institution for Science, used advanced structure searching tools to predict the first thermodynamically stable carbon-based clathrate and then synthesized the clathrate structure, which is comprised of carbon-boron cages that trap strontium atoms, under high-pressure and high-temperature conditions.  Experiments performed at HPCAT and GSECARS found a three-dimensional, carbon-based framework with diamond-like bonding that is recoverable to ambient conditions. But unlike diamond, the strontium atoms trapped in the cages make the material metallic--meaning it conducts electricity--with potential for superconductivity at notably high temperature.  For more, see January 10, 2020 issue of Science Advances, Vol. 6, no. 2, eaay8361