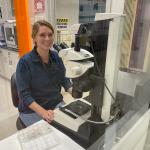 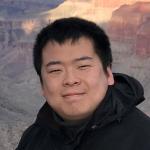 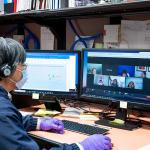 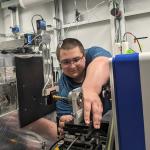 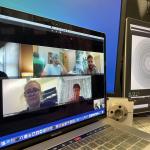 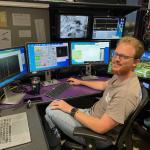 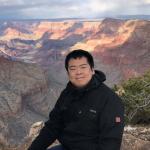 Impact of Pressure on Magnetic Order in Jarosite 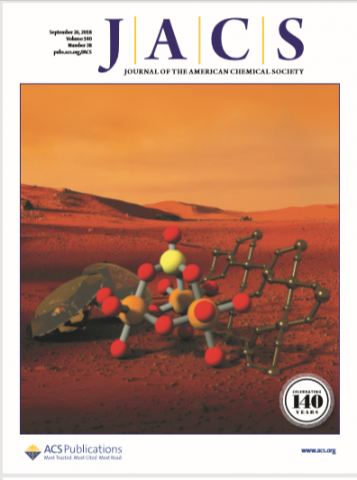 Jarosite, KFe3(OH)6(SO4)2, contains perfect 2D kagomé lattices of Fe3+ ions. The geometry of the kagomé lattice engenders magnetic frustration in antiferromagnets, yet jarosite still orders magnetically at 65 K. Given that magnetic frustration can cause exotic emergent phenomena, the magnetism in jarosite has been extensively studied at ambient pressure. Previously, rigorous synthetic magnetostructural substitutional studies varied the interlayer spacing between the kagomé layers. These studies revealed that there is no trend in the Néel temperature in the iron jarosites as a function of interlayer spacing, even though 3D magnetic ordering was thought to arise from interlayer coupling.

Researchers from the Freedman, Jacobsen, and Van Duyne laboratories at Northwestern University and from Argonne X-ray Science Division sectors 3, 4, and 16 at the U.S. Department of Energy’s (DOE’s) Advanced Photon Source (an Office of Science user facility at Argonne National Laboratory) used a suite of techniques to probe the structure and magnetism in jarosite up to 40 GPa. Using PXRD, single crystal XRD, and Raman spectroscopy, the group found a continuous phase transition between ~20–30 GPa which arises due to a stiffening of the hydrogen bond network in the material. Using XES, XANES, UV–Vis, Mössbauer spectroscopy, and optical microscopy, the team showed that the electronic structure of jarosite changes smoothly and continuously across this phase transition. Lastly, using a combination of SQUID-based magnetometry, NRFS, and XMCD, the team constructed the pressure-temperature magnetic phase diagram for jarosite. The Néel temperature increases linearly by a factor of 8, up to ~240 K, at ~40 GPa. The team showed that the magnetic ordering in jarosite is dictated by the metal-ligand covalency in the magnetic superexchange pathway along the Fe–O bond. The research is detailed in “Impact of Pressure on Magnetic Order in Jarosite” J. Am. Chem. Soc. 2018, 140 (38), 12001–12009.